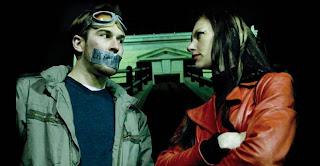 Well, I’m still not sure it is – but Jim Munroe and his vidoegrapher pals sure made it look easy last night, at the premiere of their $900 feature Infest Wisely. Shot on borrowed cameras, with a script written in seven days, in seven episodes directed by seven directors, it tells the tale of how biological nanites come to infest the world and cause all sorts of trouble. It’s got a bicycle chase, a musical number, the most convincing fake bank machine you’ve ever laid eyes on, hot bathroom sex and an intelligent cat. Overall, a kickass piece of science fiction (they call it a “lo-fi sci-fi movie,” so there you go). If there is anything wrong with it, it is the fact that it is not terribly well lit.

So shine a flashlight at your screen. You can watch it on your computer for free, an episode at a time, here.