It’s the collectable hardcover, so it’s expensive, but my Cold War novel Rasputin’s Bastards is available for pre-order for those that like to collect. This edition will cost you – it’s going for $50 – but it promises to be very beautiful.

You can find the details by clicking right here. And you can see if it’s the kind of thing you’d like to buy right here at the Devil’s Exercise Yard. Behold, the first fiblet from Rasputin’s Bastards, not far from the beginning, wherein we are introduced to a primary tool of psychic spycraft, only somewhat re-purposed: 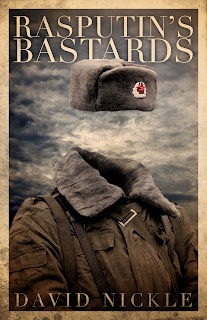 Fyodor Kolyokov hadn’t needed the isolation tank for a long time: not since the early days when all needs Physick were safely defined by the razor-wire fences of City 512. But need and desire often mingle to the same effect, and so as soon as he found a way, Kolyokov moved the tank from Russia to America. Hang the risk, he told himself. The tank was as much a part of his life as his eyes and his lungs and his heart.
The tank was an early prototype, baffled against sound with a set of casings pressed inside one another like nested Russian dolls — dolls made of iron and steel, concrete and horse-hair, ceramic and lead. Sealed inside the tiniest doll, it wasn’t hard to imagine weathering a nearby nuclear detonation.
The Cyrillic notations stamped on the outermost doll indicated expectations falling just short of that. Kolyokov had at various times tried to fill those letters with different types of cement — but the cold steel of the tank sucked moisture from the air like a thirsty whore, and Kolyokov’s attempts at camouflage crumbled within days of their application. There was no making it into anything beyond what it was: an old KGB isolation tank made for sensory depravation, that to anyone but Kolyokov would stink like an open sewer.
To Kolyokov, who had first swum in its briny middle three decades ago, it merely smelled… comfortable.

For the last of those decades, the isolation tank had gathered dust in a large storage locker in New Jersey. During that time, Kolyokov never visited — not in person. But he kept a watch on it all the same, in the manner of his training, and once a year, he would send a sleeper to see to matters of cleaning and maintenance in person. There would come a day, he was sure, when such things as this tank did not matter to the intelligence community and its existence would no longer need be secret.
In 1997, with the Soviet Union a half-decade in the grave, Russia in turmoil, and the old arsenal all but on the auction block, Kolyokov deemed that day to have arrived.
So now, the tank occupied most of the ensuite bath to Kolyokov’s rooms on the Emissary’s 19th floor. The bath had at one time contained an immense Jacuzzi tub set in pink marble. But that luxury, along with the bidet and the vanity, had been sacrificed to make room, so the tank had only to share the space with a low-flow toilet and a shower-stall.
The floor was a thick slab of concrete underneath the tile, but Kolyokov had wished to take no chances and so had constructed a second floor, just inches above the original. It was more of a platform, really, suspended by steel cable and specially-designed braces so as to distribute the tank’s immense weight beyond its own dimensions.
The platform creaked as he placed a bare foot upon it now. Kolyokov was still groggy from shattered REM-sleep, but he had to piss something fierce. The pissing, he thought, was why the dream had gone so badly. The reason that it had turned nightmare on him, and driven him awake.
Kolyokov used to be able to piss in the tank without disturbing his dreaming. The tank had been fitted with an assembly from the old Soyuz spacecraft — but the pump had failed years ago.
So Kolyokov hopped on one foot and the other, bladder twisting and wringing as he moved. He splashed body-temperature salt water all over the bathroom’s two floors, as he made his way around the tank to the toilet. A thick stream of urine made a roar in the bowl that was deafening to Kolyokov’s silence-calmed ear.