The last story I read by Peter Watts made me blind for the afternoon.

Click on the link to understand that last sentence, and also see the blog posting by my friend and fellow cephalopod-fancier Peter Watts that sent the number of hits on the Monstrous Affections pimpage page literally into the hundreds over the past couple days. No shit, yard-apes. The rift-chimps (some of whom are no doubt reading now) are legion, and they have stormed our yard, no doubt to see what Dr. Watts meant when he said “The last story I read by David Nickle left me impotent for a week.” A good half-legion stuck around to browse the free samples. I like to think some significant fraction of legion marched over to the Horror Mall and pre-ordered the book.

Well, let me return the favour. The last story I read by Peter Watts didn’t precisely leave me blind. It did remind me why he was on the Hugo ballot couple years back for his novel Blindsight (don’t judge it by its cover) — 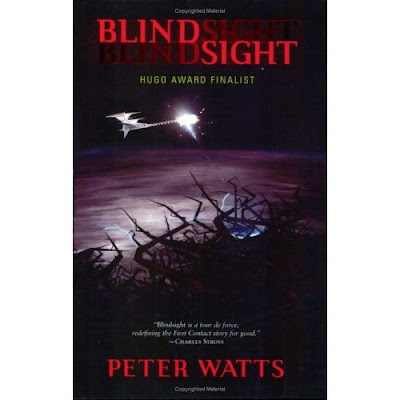 — which you can buy right here, but which Peter would rather you download for free from his website.

I warn you: he is a pessimist, and empirical about it. Blindsight encourages you to stare right into the abyss, and poses the question: What if the abyss isn’t staring back — and what if the thing that’s staring into it isn’t really you? If that doesn’t get to you, he’s also included (and superbly rationalized) a vampire to sit at your shoulder for the ride.

To see just how superbly rationalized a vampire can be, check out his Vampire Domestication talk.

So go. And say hello to the rift-chimps for me. Even if you can’t see them at first…