Some time back, I mentioned that Monstrous Affections was nominated for a Black Quill Award, for Best Dark Genre Fiction Collection. Well today, I found out that it actually won the award, in the Readers’ Choice category. Which means that readers of the webzine Dark Scribe Magazine old and new weighed in on which story collection they liked best. And this year, enough weighed in on Monstrous Affections to give it the prize. 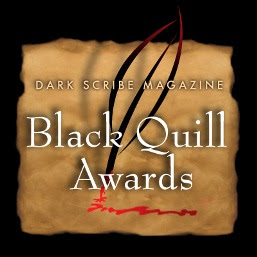 I assume some of you yard-apes had something to do with that. So thanks, yard apes! Also thanks to Dark Scribe Magazine, which sponsors and administers the three-year-old award. And congratulations to all the winners and nominees, especially Jameson Currier, who won the Editor’s Choice award in the same category for his story collection The Haunted Heart and Other Tales.

LONG ISLAND, NY, February 9, 2010 — A master of otherworldly suspense and a literary fiction darling have taken top honors in the 3rd Annual Black Quill Awards, as winners were announced today by DARK SCRIBE MAGAZINE, the virtual magazine “dedicated to the books that keep readers up at night.”

Chicago-based author Gillian Flynn snagged the coveted Editor’s Choice award for DARK GENRE NOVEL OF THE YEAR for her sophomore effort, DARK PLACES, while veteran dark scribe Dan Simmons took Readers’ Choice honors in the same category for DROOD, his historical reimagining of the last years of Charles Dickens’ life. Simmons was nominated in the same category in 2007 for THE TERROR.

Prolific genre editor Ellen Datlow – a double nominee this year – added a Black Quill Award to her lengthy list of honors for her editing work on POE: 19 NEW TALES INSPIRED BY EDGAR ALLAN POE. This was Datlow’s third nomination, following last year’s nomination for INFERNO: NEW TALES OF TERROR AND THE SUPERNATURAL and a second nomination this year for her work on the LOVECRAFT UNBOUND collection.

Nominations for the Black Quills are editorial-based, with both the editors and active contributing writers submitting nominations in each of the (8) categories. Once nominations are announced, readers of DSM cast their votes for their picks in each category. For this year’s outing, more than 3,300 votes were cast by the magazine’s readers. In a unique spin intended to celebrate both critical and popular success, two winners are traditionally announced in each category – Reader’s Choice and Editor’s Choice. Winners receive recognition in DSM, inclusion in press release materials announcing nominations and winners, a virtual icon to be used on their own website, and a handsome award certificate.