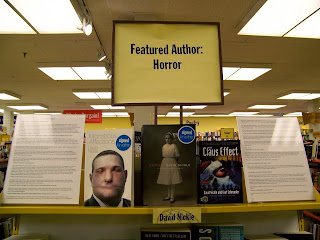 I will be there.

The World’s Biggest Bookstore, which so far as I can tell is exactly that, will be having a big old ChiZine Publications Party this Sunday. Dedicated yard-apes will have heard me make mention of this before, but now it’s just scant days before the event. So I make mention again.

Me, Brent Hayward and Gemma Files are going to be at the WBB (located in an unassuming little storefront on Edward Street just west of Yonge Street) at 2 p.m. Sunday. I’ll be reading from Eutopia: A Novel of Terrible Optimism. Brent will be reading from his starred-review-in-Publisher’s-Weekly, New-Weird-ish novel The Fecund’s Melancholy Daughter. Gemma, from A Rope of Thorns, volume 2 in her prickly (in more ways than one) weird western Hexslinger series.

This is also notable for those who wish to acquire a retail copy of Eutopia: A Novel of Terrible Optimism. As of this writing, an ordering mishap has meant that for now, the only part of the Chapters-Indigo retail chain that’s carrying the book is the World’s Biggest Bookstore. As of this writing, there are 35 copies there. Some of them are signed now. I will take care of the rest on Sunday. And also read a scary scene.

As you can see from the photo, there are also copies of the story collection Monstrous Affections, and the somewhat hard to find The Claus Effect, co-written by Karl Schroeder and me.

Thanks to Jessica Strider for the photo!