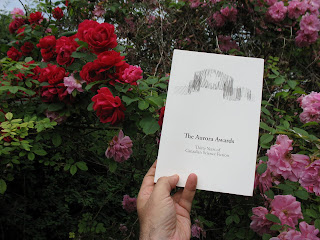 Well this takes me back. In 1991 (or so) Karl Schroeder and I sat down at a Brother portable typerwriter in a farmhouse on the top of the Niagara Escarpment, and banged out the line, “The man in the moon’s smile began to slip. It turned into a leer.” Which was the first line of “The Toy Mill,” our story about a Satanic Santa (or maybe a Santa-ic Satan?) who wishes to destroy the world with wishes, and is ultimately undone by a very focussed little girl. In 1992, it appeared in Tesseracts 4, Lorna Toolis and Michael Skeet’s edition of the long-running Canadian sf anthology series. (To give you an idea of how long-running … well, I’ve got a story coming out in Tesseracts Fourteen this fall).

In 1992, to our cackling delight, the story won the Aurora Award for Best Short Form work in English. It was pretty early in both our careers, and that award meant a lot to us, and the story. It found its way into David Hartwell’s paperback anthology Christmas Magic; Edo Van Belkom’s Aurora Award anthology; the prologue of our novel The Claus Effect; and this spring, into The Aurora Awards: Thirty Years of Canadian Science Fiction, from Montreal’s Nano Press.

My contributor copies came in the mail yesterday. It’s a handsome volume, and it has a somewhat different mix than Edo’s compilation more than a decade ago. There are newer stories – work by Isaac Szpindel, Julie E. Czerneda and Hayden Trendholm. And there are francophone stories, translated: work by Elizabeth Vonarberg, Yves Meynard and Laurent McAllister among others. And there’s a mix of older stories by Douglas Smith, Candas Jane Dorsey, James Alan Gardner… all people I’m proud to share a table of contents with.

The book is tough to find on Amazon and other spots. It is dead easy to find over at NanoPress’ site, right here.