There were so many G20 moments worthy of note here in Toronto over the weekend: the moments when black-clad droogs raised the world’s consciousness about the dangers of fiscal restraint by setting police cars on fire, smashing store windows and lobbing mailboxes into roads; the moments where police boxed joggers, dog-walkers and Oh-Canada singing protesters into a downtown intersection for several hours during a torrential downpour; or when other police fired rubber bullets into a crowd of peaceful protesters outside their makeshift detention centre (a converted film studio that would see about 1,000 detainees – the largest mass arrest in Canadian history – pass through its gates), less than a kilometer from my house. Or there was the moment that most of us missed, when the leaders of G20 countries agreed it was time to start cutting their deficits and their spending, and posed for a photo op in front of a fake Toronto skyline, separated from the real skyline by a giant steel fence and a billion dollars worth of security.

I choose this one, before it all started, on the fake dock by the fake lake that my country constructed in the media centre of the G20, for somewhere between $57,000 and $2 million. In its saucy fakery, it is a nice moment – a far better moment to think of leading into Canada Day tomorrow, than all those real ones that came immediately afterwards. 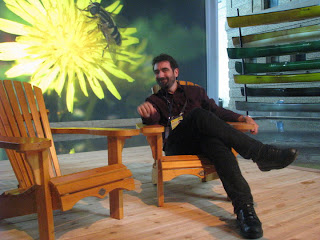 -Thanks to Erin Hatfield for snapping this photo.