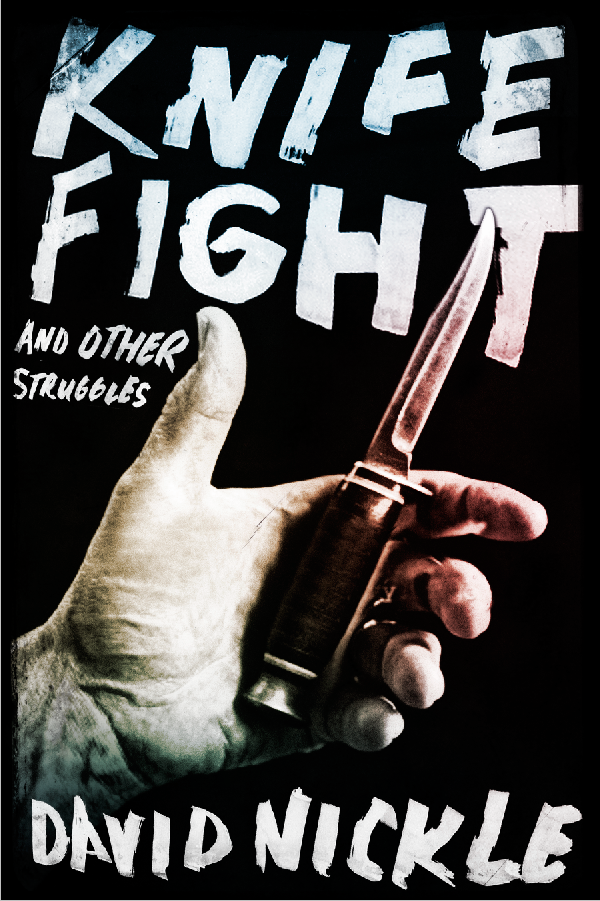 Here it is: the Erik-Mohr-designed cover to my second story collection, Knife Fight and Other Struggles. It’s coming out in October, but it’s up for pre-order at Amazon.com, Barnes and Noble, Chapters-Indigo, Powell’s, and of course ChiZine Publications.

A young man at loose ends finds he cannot look away from his new lover’s alien gaze. A young woman out of time seeks her old lover in the cold spaces between the stars. The fleeing worshippers of an ancient and jealous deity seek solace in an unsuspecting New World congregation. In a suburban nursery, a demon with a grudge and a lonely exorcist face off for what could be the last time.

And when a big city mayor who delineates his mandate by the slash of a blade faces an unexpected challenger … it turns into a struggle that threatens to consume everything.

In KNIFE FIGHT AND OTHER STRUGGLES, David Nickle follows his award-winning debut collection Monstrous Affections with a new set of dark tales that span space, time and genre.

“If the Group of Seven had worked in prose instead of oils— and if they’d been raised on a diet of Lynch and Cronenberg— they might have come close to what David Nickle fishes from his id for our edification.”

And to further whet, as it were, literary appetites, here’s a bit from the opening of the title story, “Knife Fight”:

Not many outside the confines of the political wing at City Hall would guess it, but our new mayor is an expert with a knife.

He has been practising since he was a boy—from the day he first laid eyes on the eleven-inch bowie knife jammed hilt-deep into a tree stump in the family’s ancestral woodlot, and withdrew it, claiming it as his own then and forever.

The concrete of his father’s basement workshop floor is still flecked with tiny, reddish-brown dots, a Jackson Pollock record of the young mayor’s apprenticeship, those nights when he was too slow, or worse . . . too quick. Those days are long past, and now the mayor is neither. He is merely bold. He is an expert.

Since the hour of his swearing-in, the mayor has kept the knife in the desk drawer next to his chain of office, wrapped in an oilcloth tied with thin leather straps. There it slumbers, six nights a week. The seventh—Thursday—the mayor carefully unwraps it, holds it to the fading afternoon light to see that its edge remains keen and, in the company of his older cousin . . . the one who oversees road repairs in the west district . . . the mayor steps into the elevator that takes him straight to the parking garage.

And so it begins.