Well I’m back, from England and Brighton and the World Horror Convention.

The business end of it was pretty straightforward, and went very well. We had to get there on Thursday in time to launch ChiZine’s line of books that night. This, we did – with a certain amount of gusto, I think. Gemma Files, Philip Nutman, Douglas Smith, Tim Lebbon, Claude Lalumiѐre and I all presented and read and signed while publishing/editing/domestic duo Brett Savory and Sandra Kasturi made it happen.


After that, it was as these things are, when they’re good: meeting up with a lot of good folk, seeing a fabulous town and enjoying the hospitality of the Royal Albion Hotel (whose staff were, I will say, very helpful in correcting some of the most eyebrow-raising hospitality infractions to be seen outside Fawlty Towers). I didn’t make it to very much programming – which was a disappointment. Organizers Steve Jones and Amanda Foubister did a fantastic job and I should really have paid it more heed.

Blame the bright glories of Brighton, and the conversations with so many new friends and old ones I don’t see often enough. 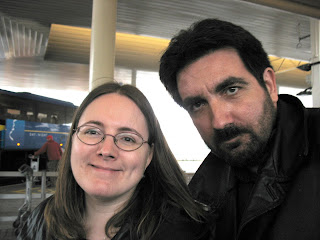 Gemma Files (pictured at left) was my travelling companion to the World Horror Convention in Brighton. Here we are, just off the red-eye from Toronto at Heathrow, awaiting our motor-coach. Gemma, incidentally (but not co-incidentally) is the author of A Book of Tongues from ChiZine. It had its launch in Brighton, and has received a very favourable review in Publisher’s Weekly. Gemma’s grin here has nothing to do with that review: this was Thursday, days before the review came out.

It was also several hours before we arrived in Brighton, and at our hotel. 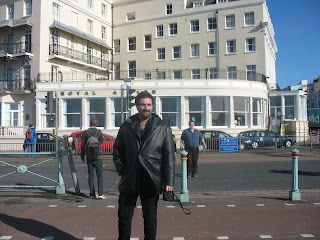 The hotel looks quite lovely from the outside – particularly on a bright morning like this one. In this sense, it leaves a misleading impression. The Royal Albion is well-suited to hosting a horror convention because it is, in so many ways, a horror show.  From the dead flies on the pillows to the toilet that would not flush, the showers that ran cold, the bath plugs only removable with the complimentary tea spoon… well, you won’t be hearing about that sort of thing on this blog. Email me separately if you need to hear more.

Feast your eyes instead, on some of the decor: like this Green Man hiding surreptitiously on the corner of an armoire in the hotel’s lobby lounge. 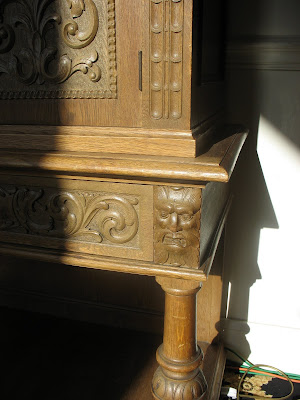 Or this rather spectacular lamp, next to the Green Man at the gateway to the dining hall: 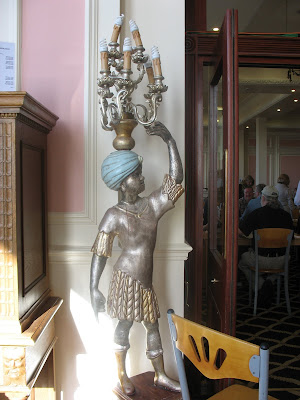 The lamp, really, makes a perfect introduction to Brighton’s big tourist draw, the Royal Pavilion. Constructed by King George IV when he was just prince, the edifice seemed to have been made with the dual purpose of blithely misrepresenting Asian cultures (aesthetically, it’s a bizarre and opulent mash-up of a mogul’s palace, a Merchant-Ivory production, a Chinese restaurant and the planet Naboo), and making George’s father Mad King George III even madder. I can’t show photos from inside, because photography’s not allowed, but here are a couple of exterior shots to give you an idea: 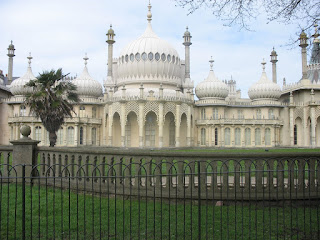 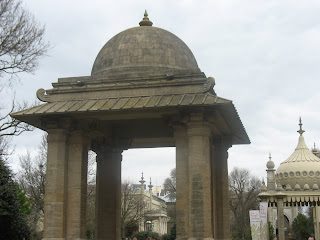 The pavilion was built on the site of a farmhouse that the Prince Regent purchased on advice from his doctor. As might be inferred from this statue, George suffered from a certain amount of gout: 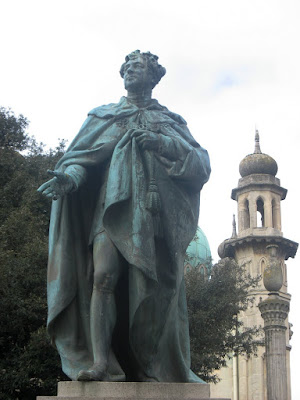 It’s unlikely, however, that the waters of Brighton helped much – because the structure became a kind of Pleasure Dome of George, Prince Regent, where guests were fattened by an army of cooks and servants, under 30 foot long, dragon-wrapped chandeliers, before they danced like fiends, drank like fish and succumbed to any vices that might be left over after that. It was many years before Queen Victoria would move in and put a stop to all that nonsense.

A group of us headed out to see the place Saturday morning – including Jetse de Vries, who some of you may know as editor of the important new optimistic sf anthology Shine: 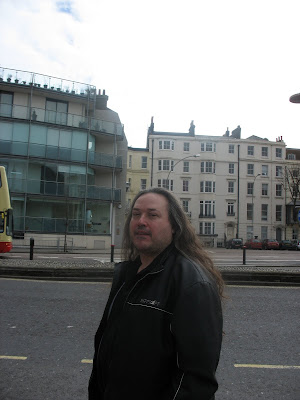 When I speak of new friends made at the convention, I mean Jetse – and Alasdair Stuart, and Philip Nutman and Anya Martin, and Sandra Wickham, and Benjamin Kane Etheridge… and that’s just a start.

I didn’t take pictures of them – stopping mid-conversation to snap a picture is a buzz kill, I find. But we did all get together for a fantastic time Friday evening, courtesy of extraordinarily generous dark thriller author Heather Graham. She was good enough to cut a deal with a pub at the end of the Brighton Pier (pictured here) – 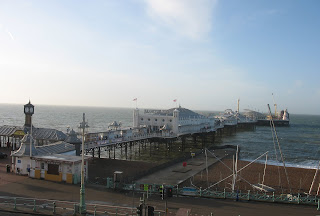 – to cover drinks and victuals for everyone at the convention, whilst she and a band of horror-author minstrels rocked out on the stage. For anyone in need of a little fear, she made sure that the Horror Hotel across the pier provided free shrieking terror to anyone who dared set ass in buggy. 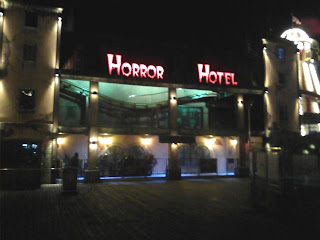 Don’t tell anyone, but Gemma kept her eyes closed through the whole ride.

It was, overall, a very good convention and I could go on for five thousand more words easily. But that would take too long. So in their place, here are five more pictures, which should be worth about the same: 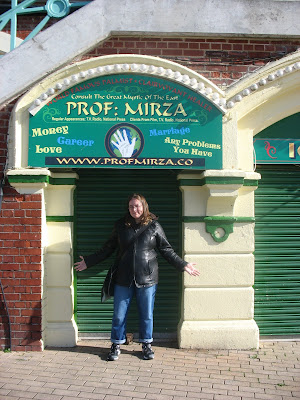 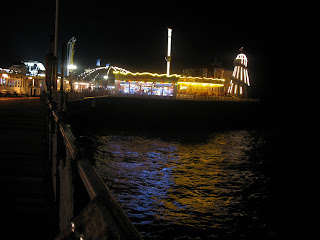 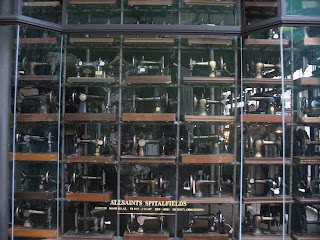 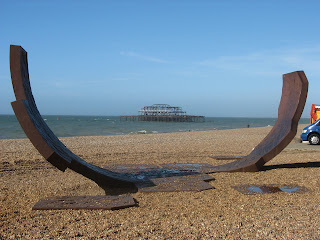 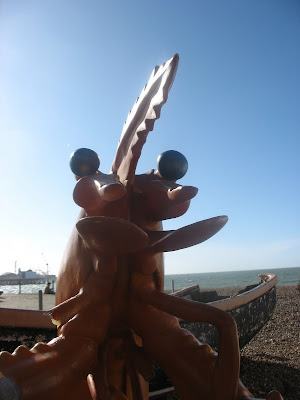