… and how awful it would have been, were it not for having spent the last two weeks of it swimming, canoing, kayaking, not-bear-hunting, finally watching Twilight, and working on a top-secret new project, on a lake near Temagami, Ontario — that looked like this: 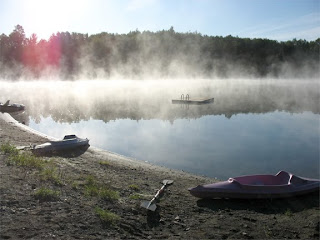 And a couple of things are going on, still.

In chronological order, then:

The story collection, Monstrous Affections, Trade Paperback Edition, will be available for pre-order from ChiZine Publications starting October 1. But in the meantime, you can pre-order it through Amazon and Chapters-Indigo. It arrives in October one way or another. To tide yourself over, you can always go read the free stuff here.

(Couple days ago, I posted an announcement in this space similar to this but for the factual error. I’d said ChiZine was selling the book September 1. That was, um, wrong. It’s October 1. Which is well after summer’s end. But there you go)

r 12, now, is something else again. There’s going to be a book launch in Toronto for Tesseracts Thirteen, the scary version of the Canadian specfic anthology co-edited by Nancy Kilpatrick and David Morrell. I’ve got a story in it, “The Radejastians,” so I’ll be there. As will authors Kelley Armstrong, Alison Baird, Suzanne Church, Michael Kelly, Jill Snider-Lum, Andrea Schlecht and Edo Van Belkom.

It’s going to be at Bakka-Phoenix Books, September 12, starting at three p.m. Bakka Phoenix is at 697 Queen Street West – just past Bathurst.