Actually, a U.S. District Court judge strikes back. According to an article in the Pensacola News Journal, a little place called Dinosaur Adventure Land is about to be seized by federal authorities, to pay the $430,000 owed to the government by the park’s founder, Kent Hovind. It makes me happy and it makes me sad: happy, in that the “theme park” was a low-rent lie that taught children erroneous science to bolster the Hovind Theory, a bizarre offshoot of young earth creationism that claimed dinosaurs and humans walked the earth together 4,000-6,000 years ago, and that the Flood was responsible for what “scientists” think of as the fossil record. It makes me sad because that low-rent lie was one of the most entertaining fibs I’ve ever had the pleasure of visiting.

Karen Fernandez and I spent a morning there back in the spring of 2006 – just two days after the municipality had ordered all the buildings shut down because Hovind had refused to obtain building permits. We were left to wander about, shooting photographs and video of the place, briefly meeting the Good Doctor himself. Eventually, we stitched those things together into an amateurish mini-documentary called Kent and I, posted it on YouTube for awhile, and endured a minor amount of internet fame.

A year and a bit back, we pulled the video down, and down it will stay. But in honor of the day (and for fear the government will bulldoze all that wonderful material that Hovind (excuse me, Dr. Dino) assembled) I thought I’d post some of the pictures Karen took that day. Click on ’em for larger images.

Like this one, of Dr. Dino, Kent Hovind (with tarantula and centipede): 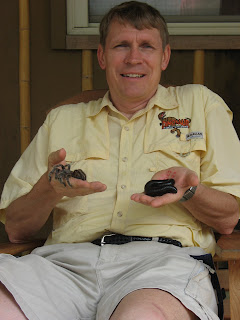 Or this one, of one of those building-permit-free structures we couldn’t enter: 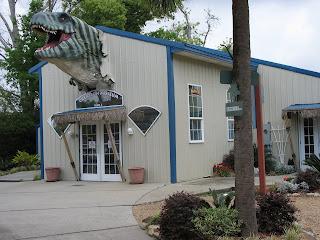 Or this one, of a display explaining how the Grand Canyon was formed in weeks, not “millions of years”: 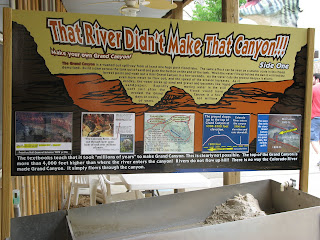 Or this one here, containing as succinct an explanation of radio-polonium halos, granite, and how it all fits in with young earth creationism, as you’ll ever see delivered to small children struggling to understand the universe in which they live: 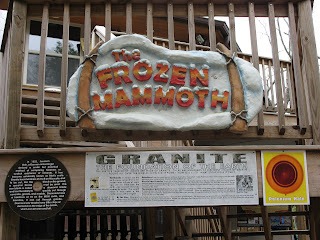 Ah, Dinosaur Adventure Land, how we’ll miss you. Now Pensacola will have to make do with only a world-class naval aviation museum to draw the tourists to the panhandle. 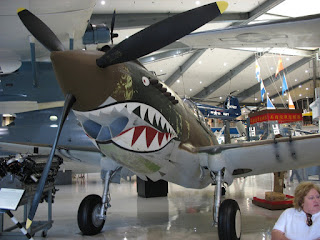 (Thanks to Madeline Ashby for pointing me to boingboing)

1 thought on “Science Strikes Back…”