…Lalumière, that being, the editor of Tesseracts Twelve and my story “Wylde’s Kingdom,” of which you’ve all heard plenty on this blog over the past month. Claude also noted my tendency to drone on and on and on about T12 and my great big story, and so assumed that I’d seen the cover for the book, which is all done now and looks like this –

– only less blurry. I had not. So I checked it out here, at EDGE’s online catalogue. (There’s a .PDF of a T12 promotional booklet containing samples of all the stories, as well as foreword and afterword, here) For the less blur-tolerant among you Yard-apes, allow me to describe: it’s a depiction of an attractive, short-haired young woman, carving herself out from a block of stone. Think of a Stone Angel cover – approved in an alternate timeline, where a far more literal-minded Margaret Laurence was pitching to the Canadian SF crowd, and Angelina Jolie’d been cast to play Hagar Shipley in the movie.

I think this cover kicks ass. It should sell lots of books, and perhaps also inspire a few intriguing websites that are nevertheless not safe for work. 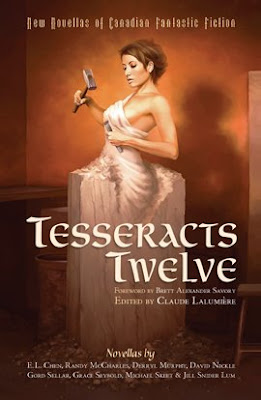 Edge put up a better image file, so I pass it along to you.