I’m pleased to announce that ChiZine Publications will be releasing my fifth book,  just in time for the holidays. And it’s going to be a bit of a departure–if one can call coming home a departure.

Where previous books of mine have dipped toe in American history, espionage, Russian literature, new-age self-help doctrine and Rankin-Bass Christmas specials, the new one goes right back to my roots: mid-1980s paperback horror novels.

And this one’s got everything: an evil doll; a bassinet; a mysterious stranger who has been walking the earth waiting for the doll and the bassinet to wake up and figure shit out; a creepy old caretaker who says things like ‘fortnight”; and a burned-out bass player from an AC-DC cover band who crucially forgets his hearing aid when he meets with the creepy old caretaker at the huge old house he’ll be renting for a fortnight, to work things out with his family.

So without further ado, may I present:
. 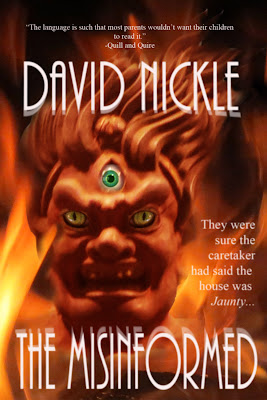 CZP is so excited about this new project that they let me design the cover myself. I had complete creative control: I didn’t even have to find a place to put the CZP logo. In fact, Brett insisted that I not find a place for the CZP logo…

It’ll be released December 24, 2013. If I can just find someone willing to typeset and copy-edit it…

2 thoughts on “Just in time for Christmas!”