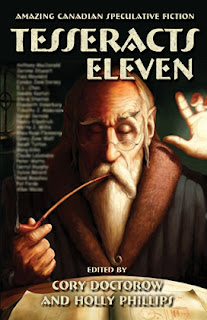 I note that EDGE Science Fiction and Fantasy Publishing, the gang that does Tesseracts these days, has put up a pretty comprehensive web page for Tesseracts Eleven – the Cory Doctorow/Holly Phillips edition of the Canadian spec-fic anthology series. It’s here, and proves to any of you doubters out there that I wasn’t just fooling around when I claimed here and here that I’d sold my story “Swamp Witch and the Tea-Drinking Man” to them. Or when I claimed that Madeline Ashby’s story beat snot out of Swamp Witch – the table of content shows her story, “In Which Joe and Laurie Save Rock and Roll,” in the all-important lead-off spot. The witch is in the appropriately snot-beat spot of number two.

For those of you coming here from Aukland and Oslo and Malaysia (and looking at my Google Analytics, I know there are a few of you), you should know: the Tesseracts anthologies are a big deal in home-grown Canadian speculative fiction. The late golden age sf author/editor Judith Merril edited the first one in the mid-1980s, in so doing attending to the birth of the late 20th-century boom in Canadian speculative fiction (DON’T call it science fiction – we Canadians hate that).

The series has published the work of many fine authors over the years – Margaret Atwood, Candas-Jane Dorsey, Charles de Lint, Robert Charles Wilson, Andrew Weiner and James Alan Gardner; and fine-authors-and-pals-of-mine Karl Schroeder, Michael Skeet, Sara Simmons, Peter Watts, Hugh A.D. Spencer and Sandra Kasturi. And also a few by me – including the first appearance of “The Toy Mill,” Karl’s and my Christmas fable that mutated into The Claus Effect, about which I’ve bent your ear enough.