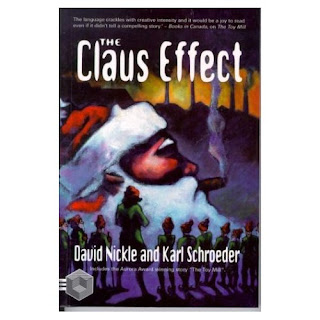 Yes – this is how I thank Devil’s Exercise Yard readers, for hauling The Claus Effect up from its 2.8 millionth sales ranking oblivion to an unheard-of middle ranking of #333,677 in Books: with a cheesy subject-line pun.

So let’s start again: thank you, Devil’s Exercise Yard readers, for helping Karl Schroeder’s and my 10-year-old Santa Claus novel claw its way up to respectability on the Amazon.com sales ranking charts. I am assuming it’s you, because the book has been languishing in seven-figure hell since the day Amazon came up with the ranking system, and it’s only been a couple few weeks since I began insisting that Yard-readers do something about that.

And accept our thanks. Karl and I are grateful bastards indeed.