It’s funny the things that pre-occupy one on Father’s Day. In the best of worlds, the day would be spent talking, hanging out, maybe a bit of tippling with the old man.

But that is not the world we inhabit today. My father, Lawrence, died just a few days into 2014. He was 83, which is not a bad time to die if you’re finished with things, but as bad a time as any if you’re not, quite yet.

Dad spent his life marrying and divorcing–twice for each–and lovingly raising the boys that came from those marriages–one from each. He also painted. Dad was a professional artist, and a single-minded one. He painted in the mode of the 20th-century Canadian art movement of the Group of Seven, en plein air, which is to say outdoors and in sight of his subject.

By the time of his death, he was touted as one of the last of the en plein air painters. It was no wonder that he was: for decades in the Canadian art world–the decades that Dad was working in his prime–en plein air didn’t get much respect. It was representational and illustrative… decorative and old-fashioned… apolitical, except maybe to the extent that it celebrated the natural world in the time of strip mining and urban sprawl. People did buy Dad’s paintings–he was able to make a solid living at it–but they weren’t celebrated; Jackson Pollock he was not.

In Kleinberg, Ontario, there is a private art gallery that collects and celebrates the Group of Seven: the McMichael Collection. It is a sprawling log structure that reminds one of a James Bond villain lair, as might exist if Tom Thomson and A.Y. Jackson ever conspired on dreams of world domination. I vividly recall an excruciating visit there with Dad in the 1970s, when I was very small. Dad had an appointment with the curator, to pitch a special exhibition of his work. It seemed like a good bet: he was working in the Group of Seven tradition, and he thought his work compared well with some of the works on display there.

It was, alas, not to be. The problem, said the curator, was that my father’s work compared too well with the museum pieces already on display. If they were to do a special exhibit at that museum dedicated to en plein air painters, it would not be the work of an artist who had dedicated himself to such an antique mode of artistic expression.

I don’t recall exactly what we did after that failed pitch. We probably drove into Toronto to go to the Royal Ontario Museum or the Ontario Science Centre or the Sam the Record Man’s record store, or one of the other places that Dad and I went on our weekend visits (this was some time after divorce #1).  What I absolutely don’t recall is seeing my father Lawrence in a toxic rage at the utter disrespect the curator had shown to the artistic discipline that he had spent his own life honouring. However he filled the rest of the day, it involved the steady business of being a good and loving father–and the day after that for him, the various tasks associated with being as good a painter as he could be.

Which brings me around to what turns out to be my preoccupation this Father’s Day: the Sad Puppies, the Rabid Puppies, the Hugo Awards and the attempted ongoing boycott of TOR.

A lot of words have been blogged and tweeted and Facebook’d refuting the arguments of a crowd of writers who maintain that “social justice warriors” have taken over science fiction and fantasy’s Hugo Award and so marginalized the kind of old-school space adventure stories that they write and like to read. These writers and fans have chosen to retaliate to this imagined slight by campaigning to have works they prefer on the Hugo ballot. There is a nasty hard-right-wing tone to the whole business, and the stink of vendetta hangs over it all–particularly surrounding the ‘boycott,’ which demands the firing of TOR’s artistic director Irene Gallo for some comments she made and the punishment of various TOR employees for comments they’ve made.

I keep looking over that last paragraph to make sure I’ve got things right and included all the twists and turns in this so-very-public narrative, but I have to keep reminding myself the details are ever changing and not, as far as I’m concerned, what is at the core of this.

What is then? To my mind, it is a seething resentment that every artist (or prospective artist) feels when it becomes clear that their work is not receiving the respect they feel it is due.

Lawrence Nickle knew something about that. His work sold steadily but unspectacularly. In lean years, he would cut back on expenses–and generally worked to live as far off the grid as he could, so as to keep those expenses low no matter what. He worried during recessions that people might be simply giving up on original art. But his response was always the same: to go out and make more paintings.

He didn’t care to self-promote. I remember asking him in the early years of the internet why he didn’t get a website, and seek out interviews in newspapers, and do other things that artists at the time were doing. He told me that he felt he had a choice: he could devote himself to promotion, or to painting. He chose painting.

It is not that Lawrence was without envy or above pettiness. He had a real, not-always-quiet contempt for quite a few of his peers in the art world, who he relentlessly held to his own aesthetic and vocational standards even when they may not have been all that relevant.  His gender and race politics were, shall we say, inconsistently progressive at best. He was a reformed-Baptist-turned-Atheist and had harsh and unkind words for believers.

For that, I don’t think he even conceived of tearing down the careers of artists working in the abstract or hyper-realist or minimalist or surrealist modes that had supplanted his niche. I think he would have seen public complaint as a kind of admission of failure. And allowing that sort of admission would have been first, horribly demoralizing; and second, inaccurate. Smart collectors paid good money for his work, and cultivated his friendship, and if they painted themselves (as many did), benefited from his mentorship. 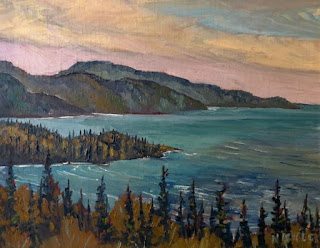 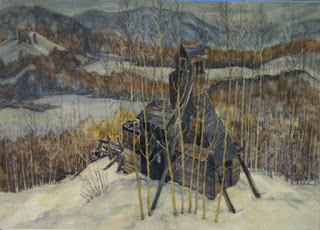 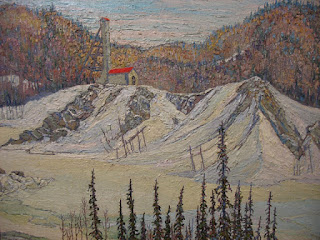 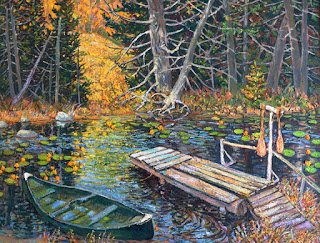 It seems to me that the life of my father Lawrence is a good example to bring up right now, in this very political culture war about what is at its root, an art form.  The point of doing art, to paraphrase Neil Gaiman, is to make good art. It is not to chase awards, or other sorts of validation; it is not to look enviously at those who do receive those awards, who bask in that validation, and try to supplant them through forces democratic or otherwise.

But I think my father would have said that the behaviour of the Puppies whether sad or angry, is the one sure sign of their not being proper artists. He would take it as a vulgar sign of weakness. It would earn his quiet but certain contempt.